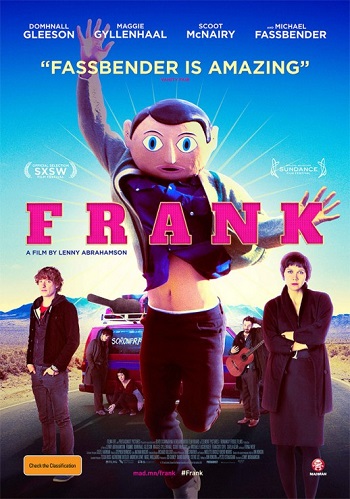 I love you all...
A 2014 British-Irish comedy-drama, inspired by the writer's experiences with the persona of comedic avant-garde musician, Frank Sidebottom, and directed by Lenny Abrahamson.
Advertisement:

The protagonist is Jon, a young, aspiring, social networking-savvy musician who finds himself enlisted into an avant-garde band named "Soronprfbs", led by an eccentric, enigmatic figure by the name of Frank—an ambitious artist who seeks to reinvent music, and rather strikingly, constantly hides his face inside a large papier-maché head.

Not to be confused with the 1973 experimental animated short, Frank Film.

This movie contains examples of the following: