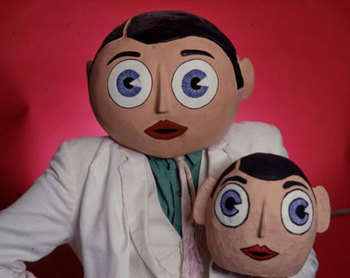 I was born in Timperley...

Frank Sidebottom was a 37-year-old man from the Manchester suburb of Timperley note although Timperley has historically been considered to be part of Cheshire, in recent years it come to be part of the Greater Manchester area, where he lived with his mum. He had a wide and varied career in what he called "showbiz", even though his mum didn't approve—over the years he made music, radio programmes and two TV programmes, wrote a column for Oink!, provided commentary on Setanta Sport, founded his own football team (The Timperley Bigshorts

) and made guest appearances on dozens of television programmes, including a regular feature on ITV children's show No.73 and the MTV Europe gameshow Remote Control. According to the liner notes of "A B C & D", his "Best of" compilation, between 1984 and 1994 he:

Well, that's not the full story. 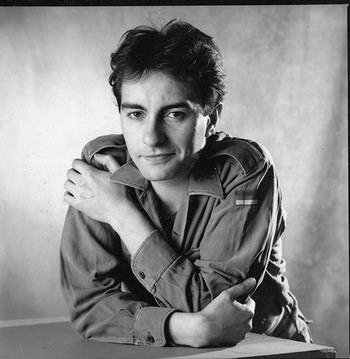 The man behind the mask
Frank Sidebottom was the creation and alter ego of musician Chris Sievey, who was born in Ashton-On-Mersey, some 2-and-a-half miles away from Timperley. Chris was a rock musician with an encyclopaediac knowledge of 3D films, a passion for science fiction (particularly the works of Gerry Anderson) and a strong desire to make it onto Top of the Pops. Unfortunately, none of these qualities resulted in a successful music career: Chris released a series of albums from 1975 to 1983 both with and without his band, the Freshies, but the closest they ever got to the Top Ten was #53 in the Singles Chart, with "I'm in Love With the Girl On The Manchester Virgin Megastore Checkout Desk". Following a particularly fallow period for the band (and after at least one close call with bankruptcy), Chris began work on a video game, The Biz, for the ZX Spectrum, which allowed players to create a band and attempt to push them to national chart success. The game came with an interview conducted by none other than a certain pop music fanatic from Timperley...Soon afterwards inthe early eighties, Chris began a career as Frank. After a short-lived contract with EMI collapsed, he turned towards independent labels and continued his march towards chart domination.

Frank inhabited a strange liminal space between his world and ours: often literally pushing his way in to the pop world, the Frank Sidebottom persona was both a celebration and a condemnation of pop music: Frank was self-promoting and desperate for attention, but he retained a naiveté and enthusiasm for music that was hard to dislike. He was annoying and repetitive to many, but sometimes his rearrangements of songs showed a flash of genius. Frank's world, as heard on his radio programmes and records and seen in his TV series, was a strange idyll in the North of England; a fantasy world where zoo animals co-existed with home-made science fiction robots and a trip into outer space was as likely as a day out in Blackpool. Chris Sievey died of cancer in 2010, aged just 54.

Frank collaborated with many people over the course of his career, including Mike Joyce and Andy Rourke, Peter Hook and Caroline Aherne. He also performed covers of many, many musicians and groups, including: Captain Beefheart, Kylie Minogue and The Fall. Famous Frank Fans include Ultravox musician Midge Ure (who appeared on his 1990 television programme, Frank Sidebottom's Fantastic Shed Show) and alternative comedian Stewart Lee, who helped raise money for a statue of Frank to be erected in Timperley in 2013. A partial discography can be found here

.You know it can, it really can.

Tropes associated with Frank Sidebottom include...

Tropes associated with Chris Sievey include...