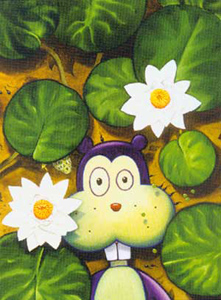 Frank is a comic series by Jim Woodring.

Frank began as a doodle. A doodle of a Funny Animal who wasn't rabbit-like or duck-like, but just ... funny looking. It was hard to tell what to do with it, but there was something about it that made it keep coming back in his mind. Maybe it was a snub given to the doodle by a coworker. First, the creature - dubbed Frank - was given human eyes and drawn into a cover of Jim's mildly successful comic autojournal Jim. Later, around this creature Woodring wrote a short comic. The human eyes were dropped, too! Woodring at first wrote the dialogue purposefully so flowery as to be incomprehensible. That didn't work right, so he wrote it with so much profanity that it made his eyes bleed to read it. That didn't work, either. In a lucky flash of brilliance, Woodring decided he'd just erase the speech bubbles entirely and tell the story in pantomime. And it became the most popular comic he ever drew.

But what about Frank himself? Frank is a young purple generic anthropomorph, he is covered with short dense fur, he is innocent but not noble, and one day he will die. He lives in a land called The Unifactor along with Manhog, Whim, the geometrically shaped Jerry Chickens, his pet Pupshaw and her boyfriend Pushpaw, the radially symmetric Jivas, and many other one-shot characters. He finds himself on fairly independent episodic adventures, from as simple as seeing an outdoors house of horrors to getting embroiled in the complex machinations of Whim.

Has nothing to do with the 2014 Irish-English film of the same name about an avant-garde rock band.