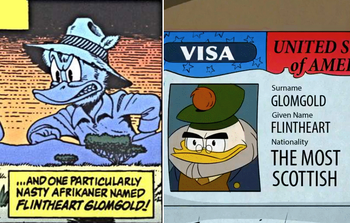 When a character's nationality is changed between the original work and an adaptation. This could be done a) to simplify the Back Story by saying the character comes from the country the work is set in, b) to vary the backstories and turn a group from one country into a Multinational Team or c) simply because that's the accent the actor has and the creators don't want to risk Ooh, Me Accent's Slipping. The trope may apply to fictional cultures as well as those in the real world. Alternatively, a character with no specific nationality may be given an explicit one during an adaption.

Sub-trope to Adaptational Diversity. Compare with Race Lift, which changes the character's ethnicity rather than country of origin (although these may overlap) and Fake Nationality. A Foreign Remake will usually do a nationality change on the entire cast, as does a Thinly-Veiled Dub Country Change.