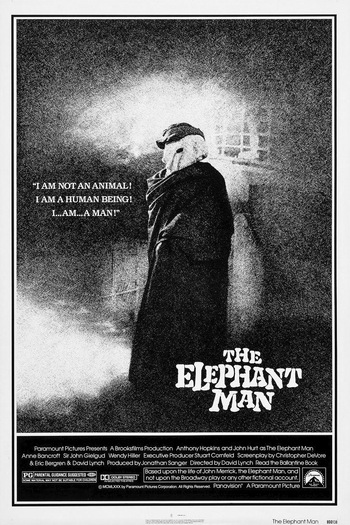 The Elephant Man is a 1980 historical drama film directed by David Lynch, based on the life of Joseph Merrick

, a 19th-century Englishman born with severe bodily deformities and nicknamed "the Elephant Man". It is notable for being a routine choice for one of the saddest films ever, as well as one of the few Lynch films not steeped in Mind Screw and Surreal Horror.

The film depicts Merrick (here called John, and played by John Hurt) and his struggle to leave an abusive circus sideshow. He ends up meeting Dr. Frederick Treves (Anthony Hopkins), who takes him out of that place and gets him into the London Hospital, where he — being an educated and kind person but still with the outward appearance of a freak — becomes the focus of London's attention, raising the question: is Merrick just moving from one circus to another?

Produced by Mel Brooks's Brooksfilms studio (with Brooks deliberately uncredited to avoid giving audiences the impression that it was a comedy), the film also stars Sir John Gielgud, Dame Wendy Hiller, Anne Bancroft, and Hannah Gordon. Don LaFontaine narrated the trailer, using lines he wrote himself, and called it his favorite of his numerous trailer works.

A sizable portion of The Elephant Man's legacy can be attributed to the Academy Awards; although it didn't win any of its eight nominations, the news that the Academy would not be recognizing the film's noteworthy makeup effects elicited such an outcry from the public and members of the industry that the Academy Award for Best Makeup was introduced the following year (although the Academy still refused to honor this film).

Michael Jackson often cited the film as his favorite movie.