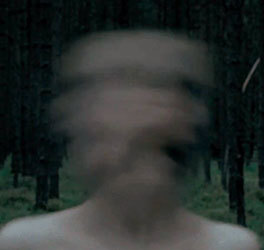 The Demonic Head Shake is a staple of horror movies of recent history, made famous by the 1990 movie Jacob's Ladder. The effect is achieved by filming somebody (or something) waving their head at a very low frame rate and later play the footage back at normal speed which creates an unsettling motion blur effect. Characteristically, the shoulders and the rest of his body remain completely still while the head goes all jittery.

This effect can be used during a Transformation Sequence or alongside a Marionette Motion where awkward body motions are filmed in Adrenaline Time creating the illusion of a broken doll. Compare Exorcist Head when someone spins their head around 360 degrees.