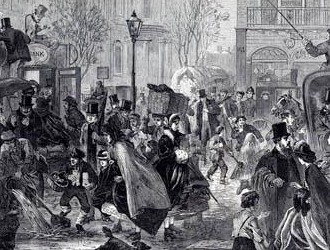 The days of Cockney flower girls; soot-faced urchins; penny-dreadfuls; machinery; morals that are, well, Victorian; men with pipes in parlor rooms and women in poofy dresses. The pea soup makes it difficult, but please — mind your step in Whitechapel...

Fortunately, if you're in trouble (and the situation is suitably intriguing), Sherlock Holmes might give you a discount, especially if there is a hint that Professor Moriarty is involved. More mundane matters can be referred to the bobbies of Scotland Yard — and no, being maimed by machinery in the workplace doesn't count. Job prospects are a bit thin since the Industrial Revolution, and chimney-sweeping, workhouses, and factories aren't so bad (even when run by bitter old misers). Would you rather be in the poorhouse?

Be wary also of wispy men with capes and strangely pointy teeth, spiritualist cultists, escaped convicts, mad or mercurial scientists, boarding schools, wide-eyed waifs, serial killers, and suspect meat pies. Also, that strange man you saw might just be your secret uncle's best friend's sister's former roommate's dog. All of which is overseen by Queen Victoria, who seems to have some connection to every sinister conspiracy threading its way through London streets, assuming she's not in their cross hairs.

This is a trope that is disturbingly accurate at times. The Victorian Era also happened in the rest of the country, of course, but, as we all know, Britain Is Only London. It's also the default setting for Steampunk stories or a Gaslamp Fantasy.

The following characters from that period may make frequent cameos: