A Foggy Day in London Town 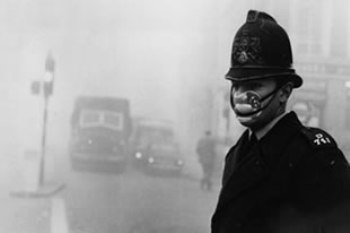 "London is a city of a hundred thousand smokes. Tonight, those smokes tangle like tarry ropes around your neck, your feet, in malevolent yellow-green coils."
— Flavor Text, Fallen London
Advertisement:

From the second half of the 19th century until well around the 1950s, England and especially London were associated with foggy, damp environments where nobody could see anything in the mist other than shadowy figures. This Ominous Fog and Mysterious Mist made it an ideal setting for detectives solving murder mysteries in near darkness.

It was Truth in Television for many decades, especially in London, situated as it is in a river valley near where it turns into an estuary. That plus the typical wet British Weather makes for ideal fog conditions. But the traditional impenetrable London fog is not just fog, but actually smog — fog combined with smoke, which was especially common in London around that time from all of the coal fires. Unlike ordinary fog, which can shift in and out quickly and isn't too bad for visibilitynote By the technical definition, fog can allow visibility up to 1 km. (as an Englishman in San Francisco once commented), old London smog smelled awful and had a nasty green tinge, hence the common nickname "pea soup" fog

. And it was a lot thicker than regular fog, too; you were lucky if you could see 10 feet in front of you.

The smog was a staple of Victorian London, when the city industrialized and both homes and businesses started burning coal for heat, but it got dramatically worse after World War II, when Britain exported all of its high-quality coal to pay for its war debt, leaving the locals with poor quality sulphurous coal that made the problem worse. It culminated in the 1952 "Great Smog" of London, a smog so bad that 4,000 people died as a result, some because of accidents thanks to near-zero visibility, but many just from inhaling the toxic air and getting sick. Only then did the British government act to actually reduce the pollutants, starting with the Clean Air Act 1956. The last bad "pea soup" fog came in 1957, making this a Dead Horse Trope.

Because modern London doesn't see this level of smog anymore, the trope is usually used to set the stage of Victorian London or The Edwardian Era, especially stories about crime (no Jack the Ripper story is complete without a foggy crime scene). You can also expect works that date from around that time to describe a foggy London as well, such as the Sherlock Holmes books.