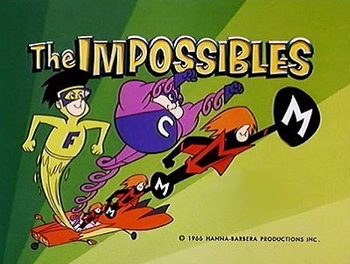 Produced by Hanna-Barbera for CBS in 1966, the same year as Space Ghost, The Impossibles (Coil Man, Fluid Man and Multi Man) were the secret identities of a three-man rock band, also called The Impossibles who took the fight right to evil.

While they had the back half of the title, they themselves had two segments per show while their co-star Frankenstein Jr. only had one.

Frankenstein Jr. and the Impossibles was one of the last H-B series animated in the classic Ed Benedict style.