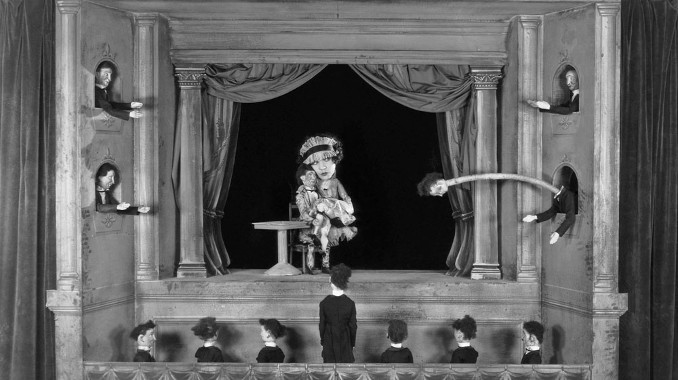 It's a pretty weird puppet show.

The Blackbird is a 1926 film starring Lon Chaney, directed by Tod Browning (Dracula).

The movie is set in the sleazy Red Light District of Limehouse in London. Chaney is a thief and master criminal named Dan who also goes by his nom de plume "The Blackbird." Chaney also goes plays the Blackbird's twin brother, "The Bishop", who runs a Christian charity mission in Limehouse and is just as loved and respected as his brother Dan is hated and feared.

Dan for his part has as one of his associates West End Bertie, a society gentleman who in actuality runs scams in which he arranges for his wealthy guests to be robbed of their jewels. Dan and Bertie both fall for Fifi, a sexy vaudeville singer (Renee Adoree), but Bertie is the one she actually goes for. When Bertie is framed for murder by Dan, a distraught Fifi goes to the Bishop for help.

What nobody—not Bertie, not Fifi, not Dan's criminal underlings, not even Dan's ex-wife Polly—knows is that Dan and the Bishop are the same person.