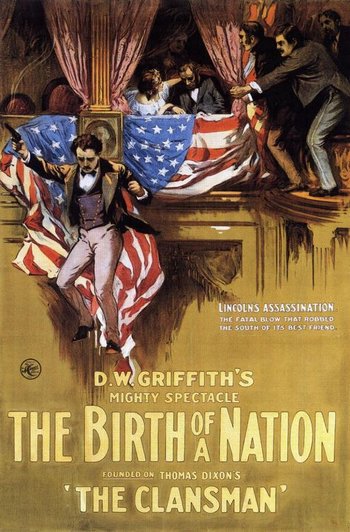 Next to the film itself, this poster looks almost subtle.
Advertisement:

The Birth of a Nation is a 1915 silent film directed by D. W. Griffith, starring famous silent film actress Lillian Gish, and one of Hollywood's first great "epic" films. Based on the 1905 novel The Clansman by Thomas Dixon, the premise of the film is a two-part chronicle of American history, with considerable neo-Confederate liberties.

The first part depicts the nation before, during, and after The American Civil War, from the perspective of two juxtaposed families— the Northern Stonemans, who are abolitionists and federalists, and the Southern Camerons, who are secessionists. When war breaks out, the houses must send their sons off to their respective opposing armies. The Camerons suffer many hardships in the war torn and depleted South, and must deal with hunger, ransackers, looters, and rapists.

Eventually, the Union army crushes the Confederacy, ending the war. President Abraham Lincoln promises to rebuild the South, in spite of protests from vengeful Northern politicians who would execute its leaders and treat the land as conquered territory. But Abraham Lincoln is assassinated at Ford's Theater, allowing the Radical Republicans, led by Austin Stoneman, to gain strength and support for inflicting punitive measures on the South for their rebellion.

The second part depicts the Reconstruction era. With the war over and slavery abolished, new issues arrive that America must resolve. The South must be rebuilt and re-integrated as part of the nation, without its dependency on slavery. The freed slaves must find their place in the new society, and their rights and legal status must be determined. Violent controversy erupts in the South over how to tackle these issues. Stoneman and the Radical Republicans go to South Carolina to try to influence the votes of Southern blacks. The Ku Klux Klan is formed in response, who hunt down and lynch a murderous former slave, rescue the Cameron family from an attack by a black militia, and effectively disenfranchise the black voters. The people depicted throughout the film as the "true enemy," though, are mulattoes— those of mixed white and black ancestry, who will stop at nothing to bring the white man down.

Being one of the first feature films ever, The Birth of a Nation introduced, refined, and popularized too many tropes to count, and is considered one of the most groundbreaking films ever, proving that cinema was a valid form of media rather than a passing fad. It was a massive hit, grossing somewhere between $50–100 million when movie tickets cost a dime. However, it was also extremely controversial even when released, as its view of Reconstruction is one that promotes white supremacy, loathsomely demonizes black Americans (especially biracial black-white people), and glorifies the KKK. In fact, the KKK had a huge revival in the years after this was released (membership numbered around six million at its peak around 1925), and many people credit Birth as one of the reasons why.

This was the first feature-length film to be screened at the White House. The President at the time was Woodrow Wilson, who used to teach at Princeton University, and Thomas Dixon was one of his former students. It is widely told that, after seeing the picture, Wilson said, "It is like writing history with lightning. And my only regret is that it is all so terribly true." The truth is that he probably never said anything like that; the quote appears to have been fabricated by Dixon.

The film is in the public domain note notorious film preservationist Raymond Rohauer tried to claim copyright on it through purchasing the copyrights of the film's producer Epoch Producing Corporation, who thought they had the rights to the movie [they didn't; D. W. Griffith did] and renewed its copyright in 1942, and sued fellow film preservationist Paul Killiam for reissuing the film in 1964, touching off a legal battle which ended in 1975 with the ruling that the 1942 copyright renewal was invalid and the film thus in the public domain, a ruling the Supreme Court upheld in 1976 and can be viewed in its entirety on YouTube

or even its article

on The Other Wiki. Many early cinema pioneers worked on or appeared in the film: John Ford is a Klansman, Erich von Stroheim was one of Griffith's assistants, and Raoul Walsh plays John Wilkes Booth.

In 2016, over a century after the original film's release, a film with the same name was released. Unlike the pro-Klan overtones of the 1915 film, the 2016 one was the exact opposite, being openly against racism and slavery; info on that film can be found here.

Compare Triumph of the Will, a similarly influential white nationalist propaganda piece made 20 years later in Nazi Germany.