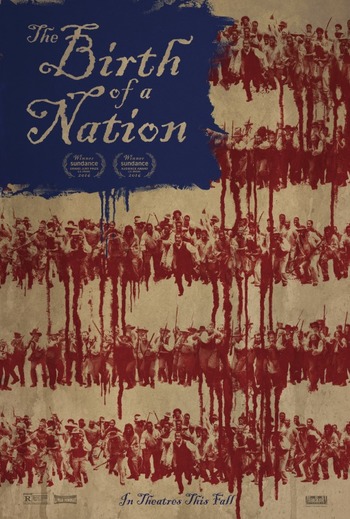 The Birth of a Nation is a 2016 historical drama written, directed by, and starring Nate Parker. It is not a remake of the 1915 film of the same name, but the title is deliberately used in contrast with that film.

The film is a depiction of the life of Nat Turner

, a slave and preacher in antebellum Virginia whose owner takes advantage of his gift for speaking and knowledge of The Bible by renting him out to nearby plantations to give speeches intended to subdue unruly slaves. In the process, however, Turner is shaken and moved by the atrocities he both sees and is victim to, eventually inspiring him to lead an armed revolt against the local slaveowners in an attempt to lead his people to freedom.

The film was given a general release on October 7, 2016. The trailer can be seen here

Compare The Confessions of Nat Turner, a 1967 novel.