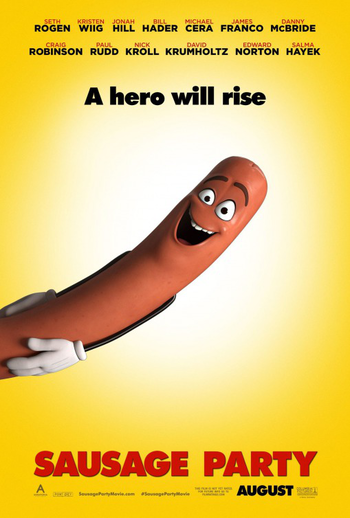 A taste of what's to come.
Dear gods
You're so divine in each and every way
To you we pray
Dear gods
We pledge our love to you forever more
We always felt we had a special bond
Take us to the Great Beyond
Where we're sure nothing bad happens to food!!
— Opening lyrics of The Great Beyond

Sausage Party is a 2016 CGI-animated feature film that has the dubious honor of being the first R-rated, completely-CGI feature-length film ever producednote (the Overly Narrow Superlative is because it is neither the first adult-oriented animated feature film — 1972's Fritz the Cat has that honor — or the first computer-animated film to be rated R — that would be 1999's South Park: Bigger, Longer & Uncut). It is a co-production of Point Grey Pictures, Annapurna Pictures, Nitrogen Studios Canada, and Columbia Pictures. Directed by Greg Tiernan and Conrad Vernon (yes, that guy), it features an All-Star Cast of Seth Rogen (who also serves as co-producer), Kristen Wiig, Michael Cera, Jonah Hill, Bill Hader, Nick Kroll, Edward Norton, David Krumholtz, Danny McBride, Craig Robinson, James Franco, Paul Rudd, and Salma Hayek. It is yet another collaboration between Rogen and co-screenwriter and co-producer Evan Goldberg, and their eighth film with Sony.

An anthropomorphic sausage named Frank (voiced by Rogen) lives in a supermarket with various other food items and products, who all hope and pray to be picked by a happy customer. When a woman comes in and purchases Frank and several others, the foods are delighted when they are taken home and believed to be fulfilling their destiny. However, this "destiny" turns out to be what you expect it to be. After Frank is told the true nature of food, he must devise a plan to help himself and his surviving food buddies escape and discover the meaning of his and all of foods' existence, and all on the run from his true enemy, a ruthless douche (literally!) hell-bent on murdering him and all of his friends.

This plot gets served with a side of adult visual puns, rampant profanity, double entendres, and over-the-top sexual innuendos and ethnic stereotyping, all in a raunchy parody of modern animated family films from the likes of Pixar and DreamWorks Animation.

A rough cut of Sausage Party (dubbed as a "work-in-progress" cut) was first shown during the South by Southwest Festival in Austin, Texas on March 14, 2016, with a Red Band trailer posted online shortly thereafter. The final cut was released in the United States on August 12, 2016.

Dear Tropes, you're so divine in each and every way...

"Hey, tropers! Firewater here. I just got super, super, super baked. And you're gonna be blown away by what I found out. You see, the thing about TV Tropes is... well... it fucks you up! I know, right? It's heavy shit. As soon as you're on that site, your ass becomes addicted."