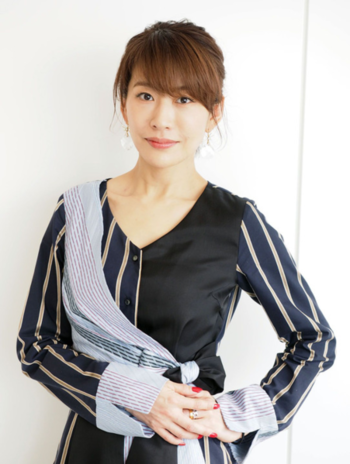 Describe Romi Park here, or I'll cut off your feet and stick them on your head!

Besides voicing tough ladies (and many angry young boys), Romi Park (born January 22, 1972) also enjoys Shaolin Kempo and swimming. Frequently compared to Megumi Ogata, as both women have rather deep voices and the tendency of voicing young boys. Tite Kubo has apparently taken notice of this, and has arranged for the two to eventually face off in the animation, as Hitsuguya and Halibel. She's so badass that Even the Girls Want Her. In more recent years, she has also voiced older women such as Sada in Dragon Pilot: Hisone and Masotan or Alma in Radiant.

She's also notable for being a seiyuu of Korean descent, which is not terribly common. Her last name (박) may be romanized as "Pak" or "Park"; she is also sometimes known as Romi Paku, based on the romanisation of her name spelled in katakana (パク・ロミ). Also, the Korean hanja for the "ro" (璐) in her name causes trouble in the Japanese community, since it doesn't exist in Japanese kanji, and so is also hard to type on a Japanese keyboard.

that she got married to Kazuhiro Yamaji on her birthday, regardless of their age gap.

It's so nice to meet you. Zài jiàn.