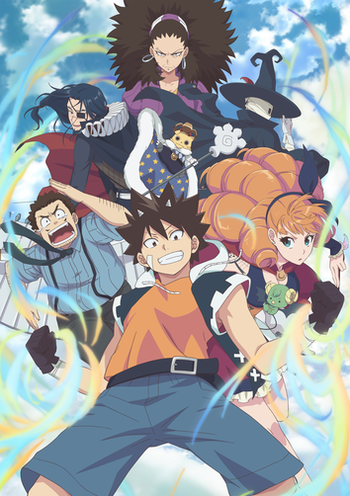 In a World… where people live on sky islands above the clouds, strange monsters called Nemesis occasionally fall from the sky and wreak havoc in towns. The only people able to inflict damage to them are the Infected, humans who miraculously survived the normally lethal contact with a Nemesis and gained the power to manipulate Fantasia, at the price of some physical defect. While people call them for help when a Nemesis pops up, the Infected are nevertheless considered abominations and feared by the common folk.

The horned orphan Seth is one of them, and lives away from humans with his teacher/adoptive mother Alma. While he absolutely wants to fight Nemesis, his impulsiveness often stirs up more trouble than he would like, which doesn't help his or Alma's case. But soon he realises that fighting off the monsters that appear here and there is pointless if you don't go for the source: an entity called the Radiant, that no one has ever found, and may or may not actually exist. Joined by the bumbling Researching Sorcerer Doc and Mélie, a Trapper Witch with a Split Personality, Seth's first step in his journey will be to join a giant flying city, the Artemis Institute, home of many professional sorcerers. And to avoid getting too much on the Inquisitors' bad side, preferably.

Radiant is a French manga written and drawn by Tony Valente since 2013, probably the most popular Animesque comic in France along with Dreamland, and also the first one to get a publication in Japan − said edition was promoted by no less than Valente's idol Murata Yuusuke. The series is also available in German, Spanish, and in English since September 2018. There are currently 16 volumes out in France, with about six months between each.

Not to be confused with a (Japanese) manga called Soul Gadget Radiant.