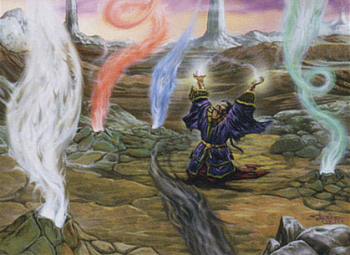 "While typically invisible to the naked eye, high densities of Mist will occasionally manifest in very visible phenomena. The highest concentrations of Mist can even do damage, leading to over-rapid changes in the environment, and violent behavior among animals and those more sensitive to the Mist's effects."
— Final Fantasy XII
Advertisement:

In some settings, magic is more of a raw natural phenomenon than something derived from designated gods or demons, acting as a kind of atmosphere enclosing a planet or permeating the universe. This background magic field, then, is magic in its rawest untapped form as a pervasive energy field that can and does affect the setting in much the same way that radiation or weather might affect our world. In areas where the background magic field is dense, strange things happen, including spontaneous miracles, bizarre weather, and hideous mutation. However, it can also greatly (if unpredictably) increase the powers of mages who tap into it. Areas of calmer magic are much more predictable, and in areas where the field is weak or absent, magic might not even be possible. If a background magic field exists in a setting, you can be quite sure that at least one school of Functional Magic will involve the channelling of this magic into a more focused form. Often it's the sole source of magic in the setting.

Note that while many settings can be assumed to have this, examples should only be included where the Background Magic Field is explicit, apparent, acknowledged, and has tangible impact on the world without anyone even having to do anything to disturb it. This may range from supernaturally altering the geography and climate to enhancing or inhibiting Functional Magic by its very presence.

The trope name is intended to echo real-world background radiation

, which captures many of the trope's aspects in a less fantastical way.

If the Background Magic Field has a will of its own, then you are dealing with a Sentient Cosmic Force.

Magic as a force of nature

Red describes this trope in detail

Magic as a force of nature

Red describes this trope in detail