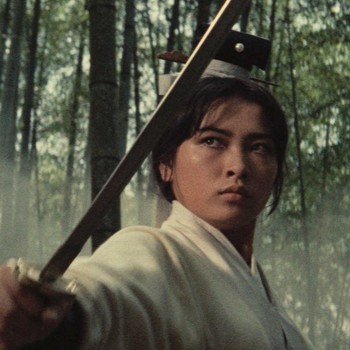 I challenge Cheng Pei-Pei to a sword-posing contest!
"A film is not just a film. A film could be an art form, not just a business."
— Hsu-feng on the 1975 Palme d'Or upon winning her award for A Touch of Zen
Advertisement:

Hsu Feng (徐楓 born 17 December 1950) is a Taiwanese actress, stuntwoman, producer and star of multiple Taiwan-made martial arts film made during the martial arts craze from the 1970s, ever since her breakthrough role in A Touch of Zen.

Having studied in a film academy for budding actors and actresses from age 16, Hsu made her cinematic debut with King Hu's Dragon Gate Inn. The film, and A Touch of Zen the following year, results in Hsu being widely considered as one of Taiwan's most beloved icon in martial arts. Her role in A Touch Of Zen note  known through it's local title, Hsia-nu - Lady Heroine has led to numerous subsequent films in the Taiwanese 70s' entertainment industry using her character as a basis in developing an entire sub-genre of female-themed Wuxia movies, starring Hsu and multiple fellow Taiwanese action-actresses including Polly Shang Guan (that Hsu co-stars in Dragon Gate Inn), Angela Mao, and Pearl Chang.

Hsu-Feng's later role in Assassin (1975), a martial arts-drama, would earn her a spot in The 13th Golden Horse Awards. Known for her professionalism as an actress, Hsu has cited her vision of "cinema as an art form" as driving force behind her success.

Ever since marrying her husband, the Shanghainese film producer and business tycoon Tong Cun-lin in the 1980s, with whom she has two sons, Hsu has changed her career from acting in films to producing movies. She is also a member of the Honorary Consul of Monaco in Shanghai since 2010, being appointed by the Royal Family of the Principality of Monaco.

In 2017, Hsu was awarded the Golden Horse Award for Lifetime Achievement. Check out this ex-wuxia icon with her well-deserved trophy

for revolutionizing the Taiwanese film industry - one movie at a time.