Film / A Touch of Zen 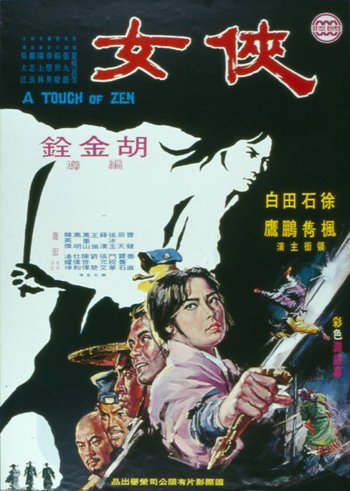 A Touch of Zen is a 1971 Taiwanese wuxia film directed by King Hu. It is a loose adaptation of the tale The Magnanimous Girl (in Chinese Xia Nü) from Strange Stories from a Chinese Studio by Pu Songling (1740).

Gu is a poor man of letters. One day, a stranger, Ouyang Nian, asks him to draw his portrait. When he comes back home, he hears a strange noise coming from the deserted palace next to his house. Finally, he finds out that Yang Hui-zhen (Hsu Feng) lives there and Ouyang Nian is sent by the corrupt Eunuch Wei to chase her. After sleeping with Yang, Gu decides to join her and her friend to fight Ouyang Nian.

A Touch of Zen provides examples of: