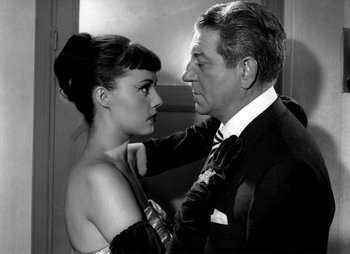 Gabin is Max, an aging criminal and hoodlum. He and his partner, Riton, have pulled off a heist in which they stole eight large gold ingots from Orly airport. Unfortunately for Max, Riton blabbed about the heist to his moll Josy (Jeanne Moreau in one of her first big roles). Josy then told her new boyfriend, the much younger gangster Angelo (Lino Ventura in his film debut). And Angelo is coming after the gold.

Max narrowly escapes a trap laid by Angelo's goons, then retrieves the gold from its hiding place and drops it off with his uncle, a fence. Riton however continues to make his partner's life difficult by blundering into a second trap. Max briefly considers abandoning Riton to his fate but eventually decides to rescue his friend.

A career-restoring role for Jean Gabin, who had been in a long, long slump ever since World War II. Max's girlfriend Betty was played by an American actress, Marilyn Buferd, who previously was Miss America 1946.