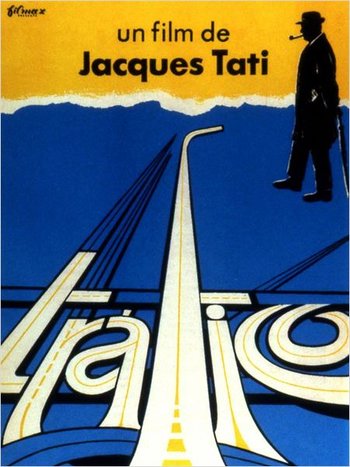 Trafic is a 1971 film written by, directed by, and starring Jacques Tati.

It is the fourth and last film of Tati's career to feature his signature character, Monsieur Hulot. In this film Hulot is working as an auto designer for Altra, a fictional Paris car company. Altra's new product, designed by Hulot, is a "camper car" or campervan

designed for recreation off the beaten track. Unfortunately for Altra, their fancy new car doesn't actually run yet, so they must haul it to a car show in Amsterdam by van. Hulot goes with the car, accompanied by truck driver Marcel. Riding herd over both of them is Maria (fashion model Maria Kimberly in her only screen role), Altra's PR rep, who becomes increasingly frustrated when the simple task of driving the car from Paris to Amsterdam turns out to be an epic ordeal.

Jacques Tati's last theatrical feature. Tati, who never recovered financially from the box-office failure of 1967's Playtime, made only one more movie, for French television, before his death in 1982.