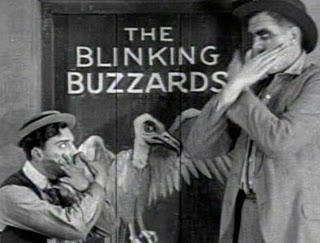 Subtle, guys.
Guarding a man from danger and killing him at the same time is SOME job.
— Intertitle
Advertisement:

"The High Sign" (1921) follows a drifter (Buster Keaton) whose audition a shooting gallery leads to his recruitment as both a hit man and the bodyguard of the intended victim. Hilarity Ensues.