Contract on the Hitman 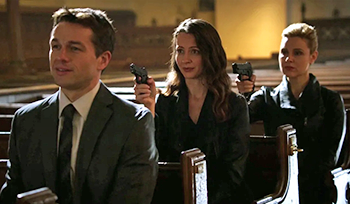 A professional killer (most likely a Hitman with a Heart) suddenly finds himself being hunted by the very organization he works for. Cue a plot line involving him taking out other assassins as he works his way through the ranks trying to find out who wants him dead and why.

Sometimes it's because the assassin wants to quit their profession, leading to The Syndicate (or The Government, or whatever other employers he's working for) reminding him, in deadly fashion, that there's only one way to leave. Sometimes it's because his employers don't want to pay him for a crucial job or consider him to have outlived his usefulness or failed them in some manner, particularly if he refused to do a hit for them that the assassin considered to be against his principles (women and kids are an all time favorite, falling In Love with the Mark being especially common). Sometimes it's revenge for a past loss or embarrassment at the assassin's hands, or because he or she wants something (or someone) that the assassin has and wants him or her out of the way. But most often, the reason for the Contract on the Hitman is because the employer doesn't want anything linking the killing that the assassin did back to them, and wants the assassin eliminated because — say it with us, people — He Knows Too Much.