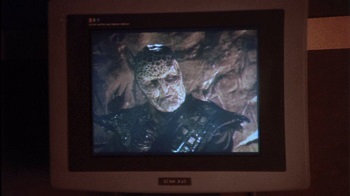 "By the time you get this recording I will already be dead. Ah, but then very shortly, so will you."
Season 1, Episode 5:

The Parliament of Dreams

Garibaldi is in the docking bay griping about Earth Central's latest idea about having all the alien races demonstrate their dominant religions, when he notices a woman come through. He promptly runs to find the commander.

G'Kar is singing in his quarters as he prepares dinner, which is interrupted by someone at his door. A diplomatic courier Tu'Pari delivers a message of high importance, which G'Kar says he will watch later. Curiosity gets the better of him, and he puts it in. The message is from Du'Rog, an old adversary of his, who is dying, which G'Kar is delighted to hear. But before dying, Du'Rog put a contract on G'Kar's life and within 24 hours of receiving the message he will die as well. The message barely ends when Na'Toth, his new attaché, arrives and introduces herself.

Commander Sinclair is getting ready to attend one of the religious functions, the Centauri one, when Garibaldi comes in. He tells Jeff that the woman from the docking bay, Catherine Sakai, is on the station. Jeff thanks him, then asks if she was with anyone. Garibaldi says she wasn't. At the raucous Centauri bash, they continue discussing her, Sinclair denying he wants to see her, but asking where she is. Eventually a drunk Londo climbs up on the table to explain the various gods...until he passes ou...er, becomes one with his inner self. The commander choses that moment to disappear.

Jeff, ignoring calls from his link, locates Catherine just finishing up a deal of some sort. When she notices him, she takes a few moments to steel herself, then goes up to him. They apparently had a promise to stay out of each other's way, but that doesn't stop him from asking her to dinner, which she accepts, insisting it's just dinner.

Na'Toth is having trouble working as G'Kar keeps staring at her suspiciously. When she asks if there's a problem, he mentions the recent death of Ko D'Ath in an airlock accident. Upon questioning her, he finds that her sponsor's sponsor was actually Du'Rog! He tells her about the assassin, and that it would be someone close to him. She counters that were that the case, they would not be having this conversation, except, G'Kar points out, he is only to die at the appointed hour. Na'Toth brings up the Assassin's Guild, and mentions that it is tradition for them to leave a black flower for their victims before they strike. G'Kar has not received one, so he begins to relax, until that night when he awakens to find a Death Blossom in his bed. With the presence of the assassin confirmed, he goes off to arrange some additional protection.

Delenn is in the customs area waiting for her new aide. He boards the station, staring wide-eyed at his surroundings until he sees her. He introduces himself as Lennier, and is clearly in awe of being able to work with one of the Grey Council, though Delenn tells him not to reveal her connection to the Council, which confuses him, but he says, "Understanding is not required, only obedience." She mentions the festivities that are going on and that she will be presenting a Minbari ritual soon, which Lennier is eager to participate in. They walk off as Delenn asks him to tell her of home.

In N'Grath's lair, G'Kar arranges for a burly, menacing looking bodyguard to accompany him.

Meanwhile, Jeff and Catherine are having dinner, discussing the pattern they usually follow: dinner, talk, bed, then one of them leaves. They agree that it shouldn't continue this way.

Later the Minbari ceremony has begun. Delenn recites passages as Lennier passes around a bowl of small red fruit. G'Kar looks around anxiously; his bodyguard is nowhere to be seen.

When he gets to his quarters he find the guard in his bedroom, dead...with a Death Blossom nearby. He has Garibaldi search his quarters, but won't tell him what really happened, and eventually has then leave, but not before Garibaldi finds a pair of hot pink panties, which he says is definitely G'Kar's color.

Meanwhile, Na'Toth locates the courier and brings him back to G'Kar. Catherine manages to land a survey deal, then is given the news that one of her previous finds has proven to be richer than estimated, giving her a very large bonus.

Na'Toth brings the courier back, and G'Kar demands to know who gave him the data crystal. It came from Na'Toth's father.

Catherine shows up at Jeff's quarters looking for someone to share her good fortune with. Jeff is a little reluctant, and initially resists her, but as she is about to leave in disappointment, he kisses her.

G'Kar is on a call and demands that Na'Toth be recalled immediately. The official on the other end apologizes for the delay, and promises they will find a new courier as soon as possible. Realization dawning, he turns around only to see Tu'Pari grin just before he stuns him.

The next morning, Catherine and Jeff are in bed discussing how things will go this time, admitting to each other that it doesn't always have to be the same.

G'Kar is in a far less comfortable situation as he finds pain givers on his neck and wrists, and Tu'Pari reads his orders. "You are to know pain...you are to know fear, and, at the appointed hour, you are to die." G'Kar tries attacking him, but the devices are set for proximity and will kill him if he gets too close, then he tries bribery, but that will compel the Assassin's Guild to kill him. He then continues tormenting G'Kar. Na'Toth, who figured out what had happened and where they were, interrupts them, claiming to be a backup assassin, she beats G'Kar across the room, but the courier is not convinced. G'Kar then pulls the pain givers off and knocks the assassin unconscious.

He goes up to Na'Toth, pointing his finger accusatorily, and says, "That hurt!" She protest that it was the only way she could convincingly remove the pain givers. She then asks what he intends to do with the assassin.

Some time later, Tu'Pari wakes up in the customs area with G'Kar and Na'Toth on either side. They explain that the deadline has passed and the commission has failed, but for his trouble, G'Kar transferred a considerable sum into Tu'Pari's account. The assassin realizes that his guild will believe he betrayed his commission, and will come to kill him. G'Kar happily declares that they are probably already on their way, but he is safe since it was his commission alone and they would just as soon forget it ever happened...except for killing their traitor, of course.

As a boarding call is announced, they hand him a travel bag then send him on his way, advising him to keep moving, because if the guild ever catches up to him: "You will know pain, and you will know fear, and then you will die. Have a pleasant flight!"

As they jubilantly walk off, they pass Catherine and Jeff. The reunited couple reflect on the week's events. For now Catherine has a survey flight to make, but should be back soon. Jeff in the meantime still has to make Earth's religious presentation, and he wonders how he can match the Minbari ceremony, which gets an amused reaction from Catherine. She apparently recognizes the ceremony, and tells him it also doubles as a marriage ceremony. Jeff quips that that must be why G'Kar was so happy, though he didn't think Londo was his type. They then spare a moment to wonder if they'll get it right this time, then kiss and head off.

Later the command staff and ambassadors are gathered in a corridor waiting for Sinclair to show up, and getting more impatient as they haven't seen or heard anything to indicate they are even in the right place. Just as G'Kar is about to leave, Sinclair shows up and leads them to a line of individuals, who he introduces one by one, each representing a different Earth religion.