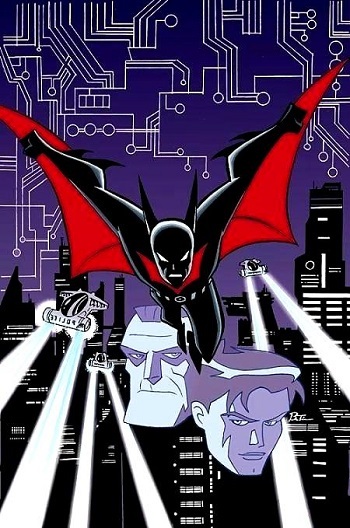 Batman in the 21st-and-a-half century.
Mr. Fixx: You're pretty strong for some clown who thinks he's Batman.
Terry: I am Batman!
— "Rebirth"
Advertisement:

40-50-something years in the future of the DC Animated Universe, Batman no longer patrols Gotham City, having hung up the cape and cowl after his deteriorating health forced him to break one of his most important rules. Crime eventually returns to overtake Gotham, this time in the form of Warriors-style street gangs who base their identities around Batman's former archenemies. The most prominent of these groups, The Jokerz, have a chance encounter with a teenager named Terry McGinnis (voiced by Will Friedle), who gets chased by the clowns right to the outskirts of Wayne Manor. An aged and reclusive Bruce Wayne (still voiced by Kevin Conroy) comes to Terry's aid, but the fight takes its toll on the former superhero. Terry helps Bruce back into Wayne Manor, but soon stumbles upon the Batcave and learns the secret of the Batman.

Bruce sends Terry away, but when the young teen returns home, the police are waiting for him. Someone has murdered Terry's father and all the evidence says The Jokerz did it. But when Terry finds evidence that connects his father's murder with Wayne-Powers Enterprises — the former Wayne Enterprises after a hostile takeover — he returns to Wayne Manor and steals an advanced combat suit to seek revenge. Bruce scolds Terry for his shortsighted actions, but after working with Terry to figure out who murdered the elder McGinnis and thwarting a nefarious plan of said murderer, Bruce allows Terry to don the mantle of Batman in full.

Bruce acts as both Mission Control and The Mentor by coaching Terry from the Batcave, lending the new Batman advice while watching his back through the suit's various high-tech capabilities. To preserve their cover stories, Bruce hires Terry as a "personal assistant" (using their encounter with the Jokerz as the official story of how they met) and re-enters Gotham's social circles. Once Terry becomes Batman, he juggles that role alongside his schoolwork, family obligations (mother Mary and younger brother Matt), and spending time with girlfriend Dana.

The Gotham City of the mid-twenty-first century has the look and feel of an archetypal Cyberpunk setting, though some Noir remnants that were present back in the Batman: TAS still show up. Gotham still has its old feel — crowded, corrupt, and dirty as all hell — but now some cars can fly, and that includes the Batmobile. Wayne-Powers Enterprises lacks the philanthropic ideals from when Bruce ran the company and Derek Powers hates the new Batman's interference in his less-savory endeavors — and when Terry eventually causes Powers's transformation into the radioactive supervillain Blight, that hatred grows far more personal.

While the show's creators tried to avoid re-hashing all of the old villains and give the show its own Rogues Gallery, a number of elements of the old Bat-Mythos were used in new ways: The Jokerz take their look from the sick imagery of the most famous Bat-villain, a number of older villains show up either in flashbacks or as aged versions of themselves, and Gotham PD still has a Commissioner Gordon — only this time it's Barbara Gordon, the former Batgirl, now in her sixties and opposed to the new Batman over a past falling-out with Bruce.

Batman: The Animated Series and Superman: The Animated Series still had new episodes in production when Batman Beyond first went into development, so no "ending" existed before Beyond began. The actual impetus for the show came from a meddling executive requesting a Batman-in-high-school series that Warner Bros. could market to the Buffy audience. Beyond itself did not have a proper Grand Finale — production ended at the conclusion of the third season without a proper series finalé — but Terry's story eventually received a conclusion in the Justice League Unlimited episode "Epilogue".

Warner Bros. produced a direct-to-DVD feature, Batman Beyond: Return of the Joker, that bridges the gap in time between the end of Justice League and the start of Batman Beyond. The film details Batman's final fight with The Joker and provides deeper reasons for why he eventually gave up the role of Batman. Mark Hamill reprised his role as "The Clown Prince of Crime", to boot.

Rumors of a potential Live-Action Adaptation have popped up ever since the show's inception; at one pointnote and some fans dream still of having Michael Keaton playing that version of Bruce Wayne, Beyond became a forerunner for a new Batman film series, at least until Christopher Nolan's Batman Begins entered production. After the conclusion of The Dark Knight Trilogy and the arrival of the DC Extended Universe rumors popped up again.

Beyond had its own spinoff comic book for a while in the late 1990s, and DC published a mini-series based on the show in the early 2010s. In 2013, DC released three new digital comic series based on (but not in direct continuity with) the series: Batman Beyond, Superman Beyond, and Justice League Unlimited Beyond. Superman Beyond was cancelled first, and the others followed in late 2014. DC's post-Convergence relaunch featured a new Batman Beyond ongoing series. For the tropes featured in those comic book adaptations, check out the appropriate page. Beyond also spawned a spinoff animated series in The Zeta Project.

As part of DC's "75 Years of Batman" celebration, Beyond received its own special animated short.

Batman Beyond includes the following tropes:

Alternative Title(s): Batman Of The Future