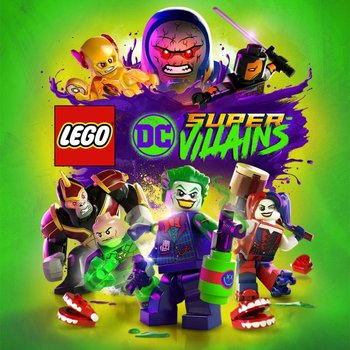 It's good to be bad!
Advertisement:

LEGO DC Super-Villains is an action-adventure video game developed by Traveller's Tales and published by Warner Bros. Interactive Entertainment for the PlayStation 4, Xbox One, and Nintendo Switch.

It is a direct sequel/spin-off to the LEGO Batman trilogy and as the title says, it focuses on the Super-Villains of the DC Universe and much like previous titles, it features similar gameplay to other LEGO adaptation games, alternating between various action-adventure sequences and puzzle-solving scenarios.

While the game was made to celebrate 10 years of the first LEGO Batman game, its plot, loosely adapted from the Crisis Crossover Forever Evil, is about the Justice League going missing due to their counterparts from Earth-3, the "Justice Syndicate", capturing them. The Syndicate is secretly working for Darkseid in search of the Anti-Life Equation - leaving Earth's fate in the hands of the villains, who form a reluctant alliance to defeat the Syndicate, and an unlikely character, the Rookie, who might have more to them than they seem...

Don't go to a Gotham City carnival if you want happy music. (SFX muted to focus on the music.)

Don't go to a Gotham City carnival if you want happy music. (SFX muted to focus on the music.)