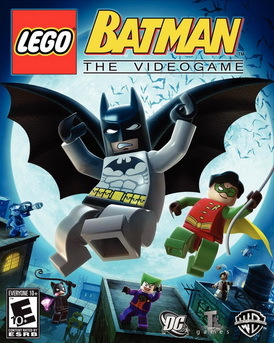 LEGO Batman is a series of action-adventure video game developed by Traveller's Tales, published by Warner Bros. Interactive Entertainment, and released in 2008 for the Xbox 360, PlayStation 2, PlayStation 3, PlayStation Portable, Nintendo DS, Mac OS X and Wii video gaming platforms. The game is based on the comic book character Batman and the LEGO Batman toy line, who also handled marketing and financial aspects of the game.

The games are based on a licensed property, and have environments, objects, characters, and creatures made out of LEGO bricks and mini-figures. LEGO Batman is the first LEGO Adaptation Game to have an original story. They also inspired a series of Direct-to-Video CGI movies, the first movie being a re-edit of the second game's cutscenes. They're all unconnected to the version of Batman in The LEGO Movie and its sequel The LEGO Batman Movie, but that version and the game version did meet in LEGO Dimensions.

After 10 years of LEGO Batman, the trilogy spawned a spinoff in October 2018; LEGO DC Super-Villains.