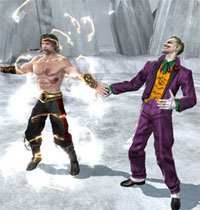 Even Liu Kang falls for it.
Antoine Rotelli: What if we say no?
The Joker: Well, Tony, nobody wants a war. If we can't do business, why, we'll just shake hands and that'll be it.
— Batman (1989)

A joy buzzer is a prank device worn on the prankster's palm, consisting of a tightly-wound spring inside of a small metal disc. When the prankster shakes hands with their victim, a button releases the spring, causing the device to vibrate intensely — a sensation that feels similar to an electric shock if you're not expecting it. In fiction, the "similar to" part is often ignored, and instead, joy buzzers use actual electricity — sometimes enough to cause serious injury or death, though many light-hearted versions simply inflict Harmless Electrocution. Don't ask how a battery big enough to contain such a powerful charge can fit inside of a device small enough to go unnoticed if you're not paying attention.

From clowns to big kids to kids with big brains, you can count on them pulling out one of these eventually. Usually made by Acme Products or a competitor.

Similar devices do exist in Real Life, however, they only deliver a small, harmless jolt, a far cry from the X-Ray Sparks that they often cause in fiction.