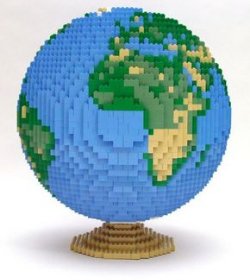 Even for God, that would take nearly a week.
Advertisement:

If there's one commercial children's toy that is far more iconic than others, it would be LEGO. They may go by different brands, but building blocks are pretty much always associated with the name LEGO. They're easy to use. They let our imaginations run rampant. They let us act out horrific acts of violence without consequences (besides breaking them, but the base parts are pretty damn indestructible, sans the ones smaller than one-fourth of a cubic centimeter). And there's also something just plain cool about seeing iconic characters in the LEGO-man look. Not to mention how adorable little LEGO stormtroopers are.

Therefore many people have started using LEGO as the literal building blocks of their medium so that everything gets built of LEGO. This ranges from webcomics with LEGO being photographed rather than drawings, through LEGO stop motion to people design video game worlds specifically to mimic the appearance of LEGO. They are taking the fun, characterful and innocent character of LEGO and building it right into their works.

The positive light LEGO blocks have been getting recently seems to indicate that LEGO may very well be the heir to the penguin throne. One of its clear advantages is its accessibility to amateurs- all you need is a bucket of LEGO blocks (although that may need a bucket of cash) and imagination to create full sets and characters.

Also, don't step on them while barefoot. It hurts like hell.

Not to be confused with LEGO Genetics. For examples of LEGO just popping up in fiction, see LEGO.