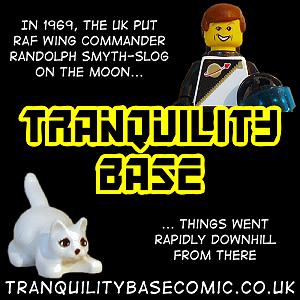 Yeah, there's a cat in space.
Spacedude: There. The new sign is completed.
Chief Houston Texas: Very nice. One thing, aren't there two "Ls" in "Tranquillity"?
Spacedude: According to the O.E.D. both spellings are acceptable, this is just a pre-17th Century variant still commonly used in the U.S.
Chief Houston Texas: I see. Did you check that before or after you made the sign?
Advertisement:

is a twice-weekly science-fiction parody LEGO Photo Comic with geeky overtones, and also a bit of pop-culture, literature and whatever else takes the author's fancy. Tends to be one-shot jokes and short-arcs - the fourth wall is optional. The comic is very British in flavour.

Starting with the Attack of the Blips storyline (a loose parody/homage of Battlestar Galactica), story arcs have got longer with greater continuity, and although the Blip story was "resolved" by the end of Volume III (Dec. 2010), its effects are still being felt into Volume IV and the reset button has been left alone.

The comic was first published in August 2007 and ran for approximately 5 years; however, following several months of inactivity, it officially ended in April 2015.

Tranquility Base is part of the Brick Comic Network.

Tropes Featured (and sometimes explicitly referenced) in this work:-