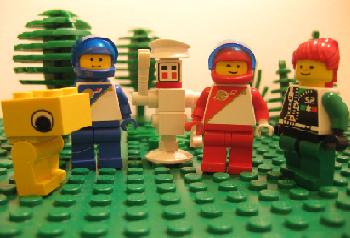 Lego Quest is a concluded Quest (similar to Ruby Quest) that was held on 4chan's /tg/ board. Unlike most other quests of its type, the Game Master used Lego figures and pieces rather than on-the-spot illustration to represent a situation. It is, at heart, a lighthearted send-up to a time when men were men, and women were women, and Space Knights carried oversized electroswords.

Set in the brightly-colored world of LEGO Space / Space Police, the quest begins with Spaceman of Futuron stranded on a remote, unnamed planet, his spaceship forced to crash land due to sabotage or accident. Over the course of his travels, he encounters a hideous Octoshark, a race of alien natives with strange powers (and an even stranger holiday), and finally has a run-in with his Hated Rival Hodge La Roque and his servant robot.

Freed thanks to the natives' unawareness of Spaceman's status as a prisoner, our hero quickly finds himself free of the shackles his hated rival has bound him with, only for La Roque to return, summoned by his robot! In what is to be the first of many insane but effective actions, Spaceman hurls the closest native at La Roque, resulting in his nemesis' disintegration and the adulation of the locals (who take Spaceman's actions as a sign of affection).