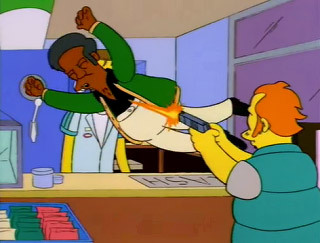 The customer is always right in the line of fire.

"That's how you recognize true heroes, my dear Anathar. They spend their time taking hits that aren't meant for them!"
— Qilby, Wakfu
Advertisement:

A form of Heroic Sacrifice where, when a villain fires a weapon at someone and another character leaps into the path of the weapon, receiving the injury instead.

Time often slows to a crawl, and the shielded one will shout a Big "NO!". The leaper will then have a scene where they weeping-ly tell the character how important they are before losing consciousness, while cradled in the arms of the survivor. Sometimes they get better, sometimes they don't, but it's close, either way. Usually results in tears and/or an angry How Dare You Die on Me! moment, especially if the person they took the bullet for loved them in any way. A More Hero Than Thou dispute may result, even though it's obviously too late.

This may be a minor character protecting a major one, or sometimes a villain will do this following a Heel–Face Turn, in which case they're probably not going to pull through.

This turns into a Diving Save if the rescuer pushes the victim out of the way without being hit by the shot. Can be done with any other projectiles: a common gag is to do it with something utterly harmless, and really ham up the shot.

For some reason, the Big Bad rarely succeeds at any attempt to empty the next bullet into his original intended target. Nor will the diver not get there in time to stop the bullet, or the bullet continue through the diver to the original target. Considering how much could theoretically go wrong with this trope, it's almost surprising how (relatively) rarely it gets played with.

There might also be the possibility that the character who took the bullet is Immune to Bullets (or whatever it is that's thrown at them), has certain protection (usually a Bulletproof Vest) or at least can recover from the injury by themselves.

The United States Secret Service (which protects the president) calls this "catching the bullet", although it is rarely actually performed. In real life, the technique is obviously different, as bullets are far too fast to react to. Instead, the human shield will stand in front of the defended individual (hopefully) prior to the shot being fired. For instance, when Kennedy was shot, the agent with Johnson (the vice president) threw him to the floor of the car and then threw himself on top of him until they reached a secure location.

If this trope is executed poorly, usually because there were more intelligent alternatives to Taking The Bullet, it can come off as a Stupid Sacrifice. On the other hand, there may very well have been No Time to Think.

Compare Go Through Me, Jumping on a Grenade, Tuck and Cover, Load-Bearing Hero, Draw Aggro. Human Shield and Bulletproof Human Shield are the unwilling versions that often happens in hostage situations. Misguided Missile is when you do this with air-to-air weaponry.

In Real Life, this is another term for Taking the Heat. Try not to confuse the tropes, though. Note also that modern small arms munitions, especially military grade, are perfectly capable of penetrating right through someone and retaining sufficient energy to kill or severely injure the person being shielded, so this is very much a last resort tactic if trying to stop someone else being shot.

Due to the nature of this trope, spoilers are likely. You have been warned.

Diego takes the blow for Manny during the battle with Soto after his Heel Face Turn. He was also originally supposed to die from doing this but it was changed after it made test audiences very upset.

Diego takes the blow for Manny during the battle with Soto after his Heel Face Turn. He was also originally supposed to die from doing this but it was changed after it made test audiences very upset.