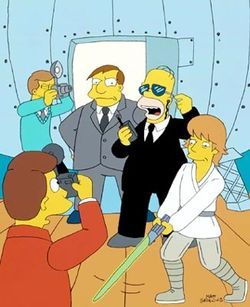 After Homer saves Mark Hamill and Mayor Quimby from a nerd riot at the Bi-Mon-Sci-Fi-Con, Mayor Quimby fires his usual bodyguards (who didn't save him because they were outside cloud-gazing) and makes Homer his new protector, but when Homer finds out that Mayor Quimby has mob ties and uncovers a plan to sell rat's milk to the public schools, Homer begins fearing for his life — and the Mayor's.

Homer joins a bodyguard program in order to practice taking a bullet.

Example of:
Taking the Bullet

Homer joins a bodyguard program in order to practice taking a bullet.