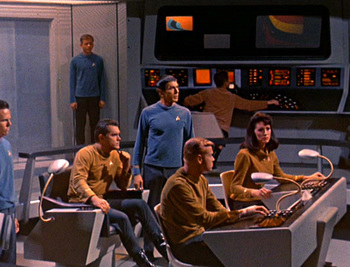 Hey, why do the uniforms look like that? Who's that on the captain's chair? Where are Sulu and Uhura? Why isn't anyone wearing a red shirt? Why is Christine Chapel on the bridge? Who's that sitting next to her? And what are those lamp things doing there?
Advertisement:

The original Pilot Episode of Star Trek: The Original Series. Written by Gene Roddenberry and produced in late 1964, it preceded the series itself by a good two years. While this pilot was not considered to have been a success at the time, the network executives did like it enough to finance a second pilot episode. And you all know how well that turned out.

The episode begins with the USS Enterprise (under the command of Captain Christopher Pike) on a routine patrol. Pike is suffering from self-doubt, having just come from a mission where a number of his landing party were killed in action (including his close friend and Yeoman).

The ship receives a belated S.O.S from survivors of an Earth spaceship that crashed on the nearby planet Talos IV some time ago. Once they arrive on this barren and desolate planet, they find a ragtag bunch of survivors, but something doesn't feel quite right about them. While the landing party does a thorough examination of the group, a young woman named Vina lures Captain Pike to a secluded spot, where he gets zapped by humanoid aliens and taken deep underground.

The survivors vanish, having been revealed to be an illusion created by the alien Talosians. Captain Pike has been placed inside a zoo. The Talosians aim to pair him off with Vina, who is in fact the only true survivor of the earlier spaceship crash. While the aliens use their telepathy to try and bring Pike and Vina closer together, in illusionary versions of his recent near-death encounter, his home city of Mojave back on Earth, and a Orion slave harem; the crew of the Enterprise attempt to breach the underground complex and rescue their kidnapped captain.

The Talosians finally kidnap two further females from the Enterprise crew, giving Pike the choice of three potential mates. The Enterprise's female first officer sets her hand phaser to self-destruct, forcing the Talosians' hand and giving them no option but to let the three of them go. Pike watches sadly as the true extent of Vina's injuries are revealed, explaining why she cannot come with them.

Footage from this unaired pilot was later re-edited as a two part regular episode called "The Menagerie", where the events were presented as something that had happened to a former crew of the Enterprise, ten years prior to the start of the main series. The original version, however, eventually made its broadcast premiere in 1988, as part of the TV special The Star Trek Saga: From One Generation To The Next, which previewed the writers' strike-delayed second season of Star Trek: The Next Generation. "The Cage" was also the last of the digitally remastered TOS episodes to air, debuting the week before Star Trek (2009) opened in theaters.

Over fifty years later, the franchise would further explore Christopher Pike's tenure as Captain of the Enterprise, first in the second season of 2017's Star Trek: Discovery, then in 2022's Star Trek: Strange New Worlds, where he is the main character.

"The Cage" provides examples of the following tropes: