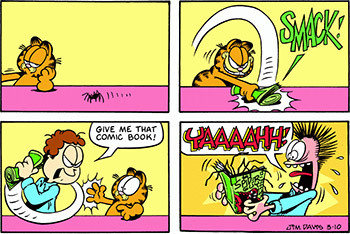 Bulma: Hey, I'm just gonna throw this out there, but you're really cute.
Trunks* Bulma's Kid from the Future: W-well you know, my mom always said I was a cute kid...
Bulma: Oooh, a momma's boy, huh? I'll be your mommy. (winks)
Trunks: [internally] AAAAAAAAAAAAAAAAAHHHHHHHHH!!!!!!!
— Dragon Ball Z Abridged
Advertisement:

A comedy trope where a character experiences something Squicky, and that character is so horrified by this, he/she lets out a bloodcurdling scream. It doesn't matter what the thing is, as long as it's clearly gross and disturbing to that character. Something like Bob drools over a decades-old picture of a hot, young woman, only to be told that it's a picture of his grandmother.

Online, there are more YouTube videos of this reaction to shock images than one can count, not to mention all the image macros that can convey this trope.

Sometimes the thing can even be Faux Horrific.

Often this can overlap with The Scream, but for some reason this rarely overlaps with Screams Like a Little Girl. Something that is Sick and Wrong may cause this reason, although it's not guaranteed that this is how they'll react.

A Sub-Trope of Brain Bleach and Comical Overreacting. Compare My God, What Have I Done?, Suckiness Is Painful.

open/close all folders
Anime and Manga
Comic Books
Fan Works
Advertisement:
Literature
Films — Animated
Films — Live Action
Live-Action TV
Professional Wrestling
Roleplay
Video Games
Web Animation
Web Original
Western Animation
(Future) Bulma: So, truth be told, I never really got to know your father that well. He and I shared one night of passion after he came back to Earth.
Trunks: Mom... you...
Bulma: And unfortunately, he didn't know what protection meant.
Trunks: I really don't need to know this!
Bulma: But after that first time I just thought well, "In for a penny, in for a pounding."
Trunks: Aaaaaah...
Bulma: And I really was.
Trunks: [externally] AAAAAAAAAHHHHHHHHHHHHH!!!
— Dragon Ball Z Abridged
Feedback

Unaware that Future Trunks is actually her Kid From the Future, Bulma starts hitting on him. Future Trunks is rightfully repulsed, but can't say anything lest he accidentally change the past. So all he can do is scream in horror in the safety of his own head.

Unaware that Future Trunks is actually her Kid From the Future, Bulma starts hitting on him. Future Trunks is rightfully repulsed, but can't say anything lest he accidentally change the past. So all he can do is scream in horror in the safety of his own head.