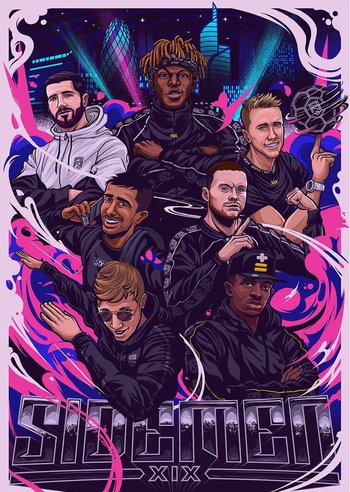 The Sidemen, initially formed as the Ultimate Sidemen, are a British YouTube-based collective of entertainers (previously just video game commentators) that officially formed on 19 October 2013.

While each of the individual members are previously known for playing various games (mostly FIFA), they have a similarly wide range of games as a group. Previously, they were most known for the "funny moments" compilations of their Grand Theft Auto Online sessions, most of which involved wacky races against one another, but they have since expanded to a rotating selection of other games they often play. Outside of gaming, they like to do silly challenges and engage in lots of banter, serving as Vitriolic Best Buds—usually each other's Butt Monkeys as well—but still showing a genuine love for each other at the end of the day.

The group's antics led them to become very popular just a couple years after their formation, and their ascension from beyond the confines of a mere YouTube group first began in October 2014 (a year after the group formed) with a web video miniseries for Comedy Central UK called The Sidemen Experience

Now, the Sidemen have gone from an informal collective group that initially existed as a simple Rockstar Games Social Club crew into a well-managed online brand with one of the most prominent followings in the UK YouTube scene, especially among young viewers. Their activities and business ventures have included a trilogy of annual charity football matches against other popular YouTubers, a #1 best-selling book, a YouTube Premium reality miniseries called The Sidemen Show, an extensive clothing and merchandise brand

, their own subscription streaming service

, and even their own restaurant chain

. Not bad for a group of seven guys who just fool around a lot.

As a whole, the group has five YouTube channels as of May 2022; their main channel,

a channel featuring short clips from their videos,

and even a channel featuring Spanish-language dubs

of their old videos. Their official website can be found here.

Members of the Sidemen (founding members in bold):

Click on the Characters button above to see the group's characters sheet and learn more about them.

Got the tropes, boys!