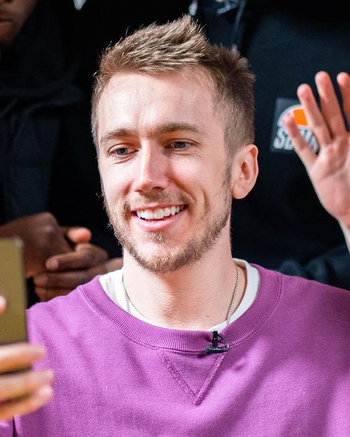 "Yo guys what's goin' on, and welcome to..."
Advertisement:

, his Xbox Live gamertag, Real Nimrod, or his Steam username, Stimpy, he is known for his FIFA videos and for being The Announcer of Grand Theft Auto Online events when he plays the game with his group, the Sidemen.

He is arguably the group's most competitive member, screaming something (usually "Yes!" or "No!") when something does or does not go his way. Although he's not the most popular Sideman (numbers-wise), Simon is seen as the biggest Ensemble Dark Horse out of the group, having a very strong following within the fanbase.

Simon has known the group's most famous member, KSI, well before the formation of the Sidemen. However, he started his main channel in February 2008, two months before KSI made his first channel, so Simon actually has the longest YouTube career out of the Sidemen, even though it took him about six years to attain one million subscribers. Today, Simon is now the third-most subscribed member of the group, behind KSI and wroetoshaw.

Thank you guys for reading, (puts hand in V sign to forehead) and... (flicks hand to camera) See ya!