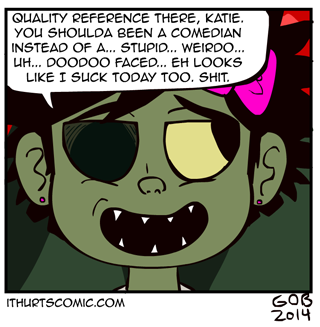 "You can't kick me because your brain is stupid!"
— Death, Adventure Time, "Death in Bloom"
Advertisement:

There are Ad Hominem insults. There are Lame Comebacks. And then there are these — insults so trite and meaningless that one may as well have called the other person a "Big Stupid Doodoo Head". Young children will resort to using these because they either don't know any better, or have run out of things to say. When an adult uses these, however, it's a good sign that they either don't have any real substance to back up their argument or they are quite childish themselves.

Other variants include "butthead", "snotbrain", "turdwipe" or - if the insulter is really desperate - borderline politically incorrect namecalling ("gay", etc.).

Sometimes Played for Laughs when it induces Felony Misdemeanor. Often involves Buffy Speak. The Bratty Half-Pint and the Manchild are fond of this.

See also No, You, really the only appropriate comeback to such an insult. Also see Badbutt and Gosh Dang It to Heck!, with which this can overlap. Flowery Insults are on the opposite end of the spectrum.

THAT'S HOW YOU GET RID OF A MONSTER, YOU BIG, FAT, DOO-DOO HEADED NINNIES!!! Bubbles does this to Blossom and Buttercup after calmly telling the monster to leave.

THAT'S HOW YOU GET RID OF A MONSTER, YOU BIG, FAT, DOO-DOO HEADED NINNIES!!! Bubbles does this to Blossom and Buttercup after calmly telling the monster to leave.