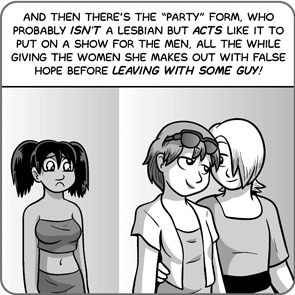 The ironic part is that the party girl is actually a guy. And so is the person to the right of them...
"Hey, a free drink is a free drink, baby."
— Sam Axe on infiltrating a gay bar
Advertisement:

Ho Yay is a same-gender relationship that seems to be more than 'just good friends'. Foe Romance Subtext is when two people seem to be more than just mortal enemies. Faux Yay is when a character pretends to be homosexual for some reason, or acts in a homoerotic or romantic way with someone else of the same gender as themselves.

One of the most common flavors is when two girls start kissing and acting a little too friendly just for the sake of gratuitous titillation, which in real life is known as "club lesbianism" due to party girls often doing this at the Coolest Club Ever. (Though it's possible for gender inverted examples to occur as well.) When a straight guy pretends to be gay himself, however, it is often done with the purpose of exploiting women's willingness to trust gay men more compared to straight men, allowing him to infiltrate female spaces and approach the opposite sex more easily.

This does not count if the homoeroticism is unintentional or the result of a misunderstanding; only if it is a contrived "performance" for some reason. Almost always leads to fleets of shipping.

In music, this is referred to as "Stage Gay", while in the sex trade (including pornography) it is known as being "gay for pay". Not to be confused with No Yay. Can overlap with Sorry, I'm Gay, but not necessarily; Sorry, I'm Gay refers specifically to situations wherein the excuse is used and rarely kept up as a facade. A specific subtrope of this is Gay Bravado, wherein characters (usually male) make loaded, homoerotic comments and suggestions to one another with the intention of appearing more macho and secure in their completely heterosexual orientation.

Compare Coming Straight Story, when a supposedly gay character genuinely comes out as being attracted towards the opposite sex.