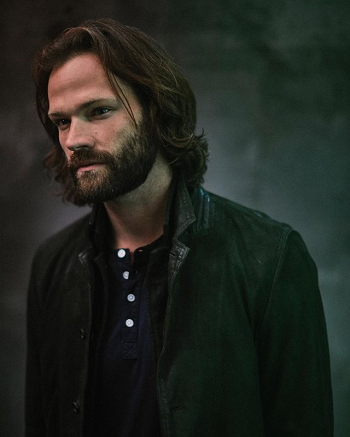 Sam: We landed in some dimension where you're... Jensen Ackles, and I'm something called a Jared Padalecki.
Dean: Oh, so, what, now you're Polish?
— Supernatural, "The French Mistake"
Advertisement:

Jared Tristan Padalecki (b. July 19, 1982) was born in San Antonio, Texas to Gerald and Sherri Padalecki. He is of half Polish descent on his father's side. He is a rarely well-documented Sasquatch and star of CW show Supernatural, and he portrays the younger, broody, angst ridden Winchester brother, Sam, alongside his real-life friend, Jensen Ackles. At 6'4" and change, he towers over pretty much everybody, but is known to be a goofball on set, and extremely friendly, even to his many crazed fangirls. He's known to be a big supporter of animal welfare, and often talks about his rescue dogs, Harley, Sadie, Arlo, and Koda. He has gained the Fan Nickname "Moose" thanks to a line from the series.

He's also known for playing long time love interest of Rory Gilmore, Dean Forrester, in Gilmore Girls, and his roles in movies such as New York Minute and the remake House of Wax. He helped to beat Jason Voorhees in the Friday the 13th remake. He is currently starring in The CW reboot of Walker, Texas Ranger, known simply as Walker.

In 2010, he married his Supernatural co-star Genevieve Padalecki (née Cortese), who played the demonic love interest Ruby to his character Sam on the show. They share three children: Thomas Colton (born in 2012), Austin Shepherd "Shep" (born in 2013) , and Odette Elliott (born in 2017).

In 2013, he went public about his struggles with depression and anxiety, beginning a charity campaign called Always Keep Fighting that contributes to several mental health-related causes.

Tropes associated with this actor's career: