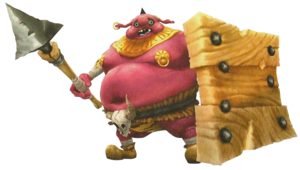 "When its shield is at the ready, most attacks will be quite futile."
Advertisement:

A mook that carries some sort of a shield that protects them from standard attacks from the front. They may be able to do a Shield Bash and can often protect other mooks with the shield. Usual ways to dispose of him are: attack him from the back or from the side; hit the shield enough times so that it breaks; use some sort of a special attack to break the shield or knock it out of their hands; hitting the enemy with an area-of-effect attack such as an explosive that the shield can't deflect; wait for him to drop his guard, usually to attack, and then quickly Counter-Attack him.