Video Game / Son of Nor 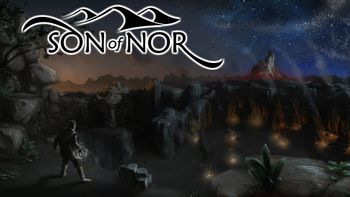 Son of Nor is an Action-Adventure videogame developed by Stillalive Studios.
Advertisement:

In there, the player controls a magician (male or female) on a mission to save the humanity’s last city from the Sarahul, an invading lizard-like race. Unlike Lichdom Battlemage, the player character rarely utilises traditional magic projectiles, blasts and auras, but is instead capable of fully manipulating their physical surroundings through the power of telekinesis, which is important both for fighting enemies and bypassing many traps and obstacles in their way. There’s a coop mode and 2/4 person multiplayer included in addition to traditional campaign.

on Kickstarter, and was released on Steam Early Access on 14th June, 2014, with the full version releasing on March 31st, 2015.

Son of Nor provides examples of the following tropes: