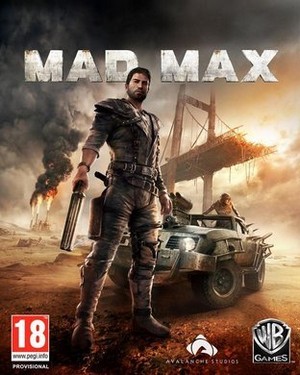 Do you come from a land down under? Where breast milk flows and Warboys Plunder?
"It is known that the world fell, and that most people in it died. The dead will not suffer the hardships of the terrible world which remains. Those born into this hell have no remembrance of anything else. Those who survived...Those who are the truly broken. For they know what was before."
— Griffa
Advertisement:

The player takes on the role of the titular character, and features a variety of weapons which Max can use to defeat his enemies. Though the shotgun is Max's weapon of choice, ammo is scarce, so melee options are generally the easier and the smarter way to go. The 'thunderstick' is an explosive weapon that can be lanced into an enemy's chest, blowing the victim up. The harpoon can be used in-vehicle with Chum riding along. The Magnum Opus can be combined with a V8 engine and powerful ramming ability to destroy enemies' vehicles and weaponry. Weapons, such as a collapsible sniper rifle and under-mounted side burners, can also be added to the Magnum Opus.

With the PC release of Grand Theft Auto V coming earlier in 2015, and Mad Max being released on the same day as Metal Gear Solid V: The Phantom Pain, it was massively overshadowed by those two open world mega franchises. Despite this inauspicious start the game launched to fair to good reviews and did enough to become one of the sleeper hits of 2015. Subverting the expectations of many people in the media & gaming community who thought it would be a rushed, zero-depth licensed game due to launching around the same time as Mad Max: Fury Road. In short, Mad Max was praised for its Arkham-style combat, driving mechanics and wasteland aesthetic, but recieved criticism for its graphical glitches and repetitive missions.

Max may have won the Gastown race, but he must overcome one final opponent to claim his prize.

Example of:
The Thunderdome

Max may have won the Gastown race, but he must overcome one final opponent to claim his prize.