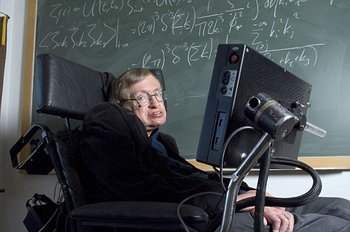 "Although I cannot move and I have to speak through a computer, in my mind I am free."
Advertisement:

In the world of fiction, physical impairment = scientific credibility. The world is actually an RPG Mechanics 'Verse, and when this Munchkin rolled up their character, they were Min-Maxing. Anyone in a wheelchair will possess super intelligence to compensate for his disability. This allows the character to remain a vital part of the cast without being expected to do anything physical. They are the exact opposite of Dumb Muscle, which exist on the same principle.

A form of Disability Superpower. See also Evil Cripple for when a Genius Cripple turns out to be evil.

Examples will often be a Squishy Wizard, Blind Musician, Blind Seer, or Deaf Composer. See also Ironically Disabled Artist, when physical impairment doesn't stop creative skill (as opposed to brains). Also compare Handicapped Badass for the physical counterpart of this trope, and Genius Bruiser if both tropes overlap with each other. Sickly Neurotic Geek and Geek Physiques can be similar to downplayed versions of this trope.