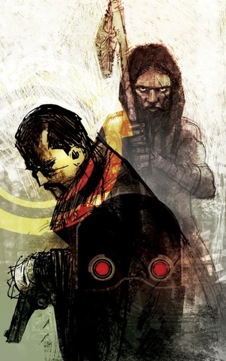 From top to bottom: The Prophet, Greer, Steeplejack
Advertisement:

In the year 2054, humans have all but replaced their bodies with lifelike replacements called "surrogates". Violent crimes are down and everyone gets to have the body of their dreams, but beneath society's polished façade not all is well. Tensions between mainstream society and an anti-surrogate religious group led by "The Prophet" continue to fester, while surrogates turn up destroyed by a mysterious, superhuman figure.

Police Detective Greer becomes a victim of the anti-surrogate crimes, and to catch the perp he must venture out of his home without a surrogate for the first time in years. As the case progresses, Greer himself begins to doubt the benefits of living life through proxies.

There's also a prequel titled The Surrogates: Flesh and Bone, taking place 15 years prior to the original story. It goes more in-depth in Greer and The Prophet's backstories as well as the initial stages of surrogate integration into society.

The Surrogates has also been adapted into a film named Surrogates (note, no "The"), starring Bruce Willis.

The Surrogates provides examples of: