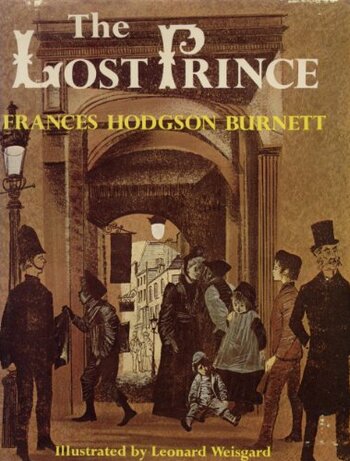 The Lost Prince is a 1915 novel by Frances Hodgson Burnett, the author of A Little Princess and The Secret Garden.

Samavia is a small kingdom somewhere in Central Europe which has been torn by internal strife for centuries as various factions squabble over the throne, left vacant after the last king of the old royal house was assassinated and his son, the noble Prince Ivor, disappeared. Legend has it that Prince Ivor survived the assassins' attack and went into hiding somewhere, and that one day his heir will return at the head of a secretly-gathered army, sweep away the squabbling factions, and restore the country to rights.

Marco Loristan is a young Samavian who has never seen Samavia; his father is a displaced Samavian patriot who travels from country to country attempting to secure aid for his stricken homeland. At the beginning of the novel, they come to live in London, where Marco befriends a group of street kids led by a crippled boy called "the Rat", who invents games for them in which they are soldiers preparing to fight for a noble cause. Inspired by the plight of Samavia and the legend of the Lost Prince, the Rat turns his mind to how he and his friends might be of use, and comes up with a plan whereby boys like himself and Marco might serve to carry secret messages without arousing suspicion.

Unexpectedly, he is offered a chance to put the plan into practice for real: the network of patriots Marco's father is part of have decided the time is ripe for something to be done about Samavia, and there is a need for certain secret messages to be carried. As Marco and the Rat learn more of what is going on, it becomes apparent that there's more truth to the legend of the Lost Prince than one might have believed.