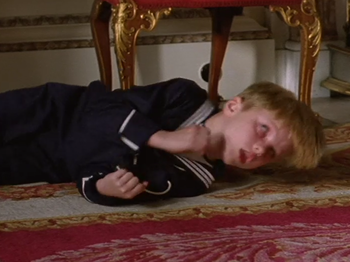 He'll live. For a bit.
A two-part telemovie about The Prince John

, youngest son of King George V who suffered epilepsy and mental disability. It was written and directed by Stephen Poliakoff who also did Shooting The Past, Summer of Rockets, and numerous stage plays.

The Lost Prince provides examples of the following tropes: