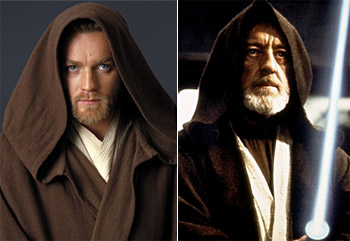 When a story spans decades, it is often not possible for the one actor to play the same character throughout. Heavy make-up might just let the 30 year old play 90, but never 10. Instead, multiple actors are used for the same role.

A time-shifted actor will usually be credited as playing 'Young Mr. X' or 'Old Ms. Y'.

Differentiated from the other actor replacement tropes by the passage of long stretches of story-internal time. If those long stretches of time have to pass during a short stretch of footage, an Age Cut will allow the actors to be swapped quickly.

This is especially popular in prequels and sequels, or in stories with a Framing Device in which 'Old Ms. Y' recalls events of her younger days.

Sometimes the necessary resemblance between Mr. X and Young Mr. X will be achieved by use of a Real-Life Relative. If only a photograph is required, an old picture of the actor/actress will suffice.