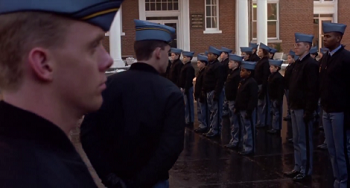 A school where not only do you learn mathematics, but how to shoot a rifle.

Military schools are institutions which aim to instill military-style discipline in students. Often the explicit goal of such schools is to prepare students for military careers. The military school is intended for minors, as opposed to the Military Academy which trains at the undergraduate university level.

The idea of the military school is rapidly becoming a Dead Horse Trope. Military schools were more common in ages where service was a family tradition, especially among aristocrats, and large standing armies sought new manpower all the time. They were (and are) also very common in dictatorships where the school seeks to instill loyalty to the regime (such as the Hitler Youth or the Young Baath Party). In modern America, this had once varied; in the 1990's and the late 1980's, it was considered justified for "problem" kids and delinquents whose parents were oft too busy to handle raising them in a nuclear family structure with a 9 to 5 job, but thanks to massive publicity of on site abuse, deaths of internees, and extremely harsh and inhumane treatment by both incompetent and criminally aggressive individuals, even its heads,

note The camp mentioned in question horrified the notoriously nasty Sheriff Joe Arpaio sending youths to military camps is viewed as borderline child abuse and most such institutions have closed.

In fiction, a rebellious teen may be threatened with one, or be sent to one if they've been Expelled from Every Other School, making it a variation on the Boarding School of Horrors theme. It is also a common basis for a Boot Camp Episode or Off to Boarding School. Compare Military Academy, which is for older students who tend to take it more seriously.

Sometimes includes an element of Ho Yay or Homoerotic Subtext, due to the fact that military schools in fiction and reality tend to either be all-male or mostly male.

Absurdly Powerful Student Council exists here in the form of a command staff.