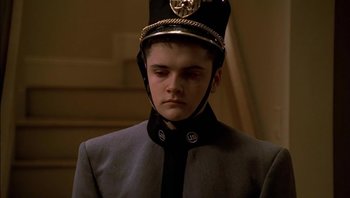 A.J. and his friend Egan Cosmo hide out in the boiler room of their school Verbum Dei until closing to sneak into a classroom and fabricate passing grades on a test they had both flunked. While hiding in the boiler room, both boys pee on the wall. Very shortly afterward, the dean of Verbum Dei meets with them, taking note of their identical A+ test scores. He then claims their DNA was found in the urine from the boiler room and expels them both. Egan just breaks down crying, while A.J. attempts to shift the blame away from himself.
Advertisement:

Jackie, Jr. hides out in a housing project in Boonton, living with a single father and his chess enthusiast daughter, who refer to Jackie as "Mr. X" when he refuses to give his name. Though his hosts make an effort to teach him chess, Jackie grows frustrated and gives up on it quickly. Meanwhile, Mob associates quickly identify Jackie's location, but Ralph, the captain now responsible for Jackie's fate, procrastinates making a decision, as letting the kid live would diminish his respect, but he's dating Jackie's mother. Jackie calls Tony at home crying and begging for forgiveness, and Tony quickly shuts him down. This uncomfortable exchange prompts Tony to meet with Ralph, ordering him to make a decision sooner rather than later. Ralph makes the call and his button man Vito Spatafore shoots Jackie in the back of the head while he goes for a walk.

At Tony's office, Paulie tells him Carmela has called and is crying. Tony expects that she has learned about Jackie's death, but is blindsided to find out that A.J. was expelled from Verbum Dei. Tony loses his temper and goes on a tirade at home, abruptly deciding that he will send A.J. to military school. When A.J. talks back to Tony, he hits him. Carmela, though angry with A.J., is horrified by this. Later as the three of them sit at a table going over brochures for military school - a subject about which only Tony is enthusiastic - Carmela answers a phone call and learns that Jackie Jr. is dead. She is shocked and A.J. is stricken as well. Tony feigns surprise, but quickly maneuvers to use the situation as a warning to scare A.J. straight about his irresponsible behavior. Later, A.J. calls Meadow to tell her the news, but gets sidetracked when she thinks he's calling about his expulsion and tells him that the supposed DNA found in his pee was a bluff. Eventually when A.J. gets around to telling her Jackie is dead, she drops the phone in shock.

Paulie moves his mother, Marianucci, into Green Grove, the retirement community/nursing home where Tony sent Livia. Marianucci, a sweet old lady, is moved to tears by her son's kindness in sending her to such a nice living environment, but the cost of keeping her there weighs heavily on Paulie's finances. He requests a sit-down with Tony and Ralph, demanding a higher percentage of a lucrative job Ralph pulled off based on Paulie's tip, but Tony settles on giving Paulie a quarter of what he asked for.

As Junior's cancer is in remission, making him physically fit for a RICO trial, the FBI mobilizes against the Soprano family once again. After the death of Big Pussy and the fiasco of the lamp microphone in the Soprano basement, they need a new plant close to Tony. Harris identifies Christopher, who has been rapidly ascending in the ranks, as a promising lead. Deborah Ciccerone, an attractive younger agent, is assigned to befriend Adriana undercover as another glamorous big-haired Jersey girl.

Tony decides on Hudson Military Institute as A.J.'s next school. A.J. meets with Major Zwingli, the head of the institution, and is totally out of his depth when confronted with the level of discipline Zwingli promises he will face. Zwingli then meets with Tony and Carmela. He impresses Tony with his masculine and straight-shooting attitude, but Carmela remains reluctant to send A.J. to a military school, as she believes it will train him to kill. That night Tony and Carmela have a volatile argument about the subject and end up sleeping in different rooms, with Tony repeatedly slamming a door in frustration and A.J. attempting to drown the noises out with his headphones. The next day the family attends Jackie Jr.'s wake. Meadow grieves openly while Carmela is unsettled by the sight of the dead man not much older than A.J. That night she relents to Tony's military school decision, opting to "try it his way".

Meadow is at odds with Carmela in the aftermath of Jackie's death. When Meadow suggests that an upbringing connected to the mafia had something to do with Jackie's death, Carmela shuts her down and claims Jackie did it to himself. Jackie is buried, with Rosalie screaming in grief during the funeral. During the burial a minor sting is carried out on the mob for their sports book over Superbowl weekend, with Silvio and Christopher getting arrested, Paulie frantically running away and a paranoid Junior making a scene as he flees. Afterwards, when the group of mourners bring Rosalie home, Meadow shares a drink with Jackie's sister Kelli. When Kelli expresses a disdainful skepticism regarding the story that Jackie was killed by black drug dealers, when the police report implicated a heavyset white man, Meadow becomes defensive of the family, alienating Kelli.

With his parents in agreement, A.J.'s future seems set in stone. Reluctantly he puts on the uniform for Hudson, but even as both Tony and Carmela attempt to reassure him that it will be a positive experience, he suffers a panic attack and collapses. Tony later speaks to Dr. Melfi about his son's panic attacks, revealing that when A.J. collapsed on the football field at Verbum Dei they chalked it up to dehydration. He becomes tearful and emotional, and when Melfi tries to get him to divulge his feelings, he can only express this dismay that military school is no longer an option, asking "How are we gonna save this kid?"

Several Soprano family members and associates convene at Vesuvio's for a dinner following the funeral. Paulie meets with Johnny Sack outside and, disillusioned with Tony's treatment of him, offers to give John information about the Soprano family. Christopher and Silvio make bail and arrive at the gathering as well. When Junior, a few drinks in, begins to sing, a drunk Meadow mocks him and throws bread at him. Tony drags her outside, demanding to know the cause of her disrespect, and she refers to the proceedings as "bullshit" before running across the street. Tony returns inside and watches Junior sing with Carmela and A.J.

Rosalie and Meadow break down, sobbing heavily as they struggle to cope with the death of Jackie Aprile Jr, who happened to be Rosalie's son and Meadow's former boyfriend.

Rosalie and Meadow break down, sobbing heavily as they struggle to cope with the death of Jackie Aprile Jr, who happened to be Rosalie's son and Meadow's former boyfriend.