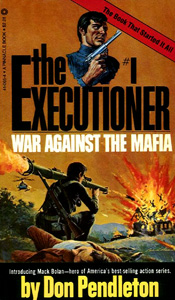 "I am not their judge. These people have judged themselves by their own actions. I am their judgment. I am their executioner."
Advertisement:

An Action/Adventure Series created by Don Pendleton in 1969 that became a Long-Running Book Series. Over 600 novels have been written featuring the protagonist Mack Bolan and various spin-off characters.

Mack Bolan (nicknamed "The Executioner" by his fellow soldiers) is an elite sniper/penetration specialist in The Vietnam War when he receives word that his father Sam, a steelworker in Pittsfield, has gone insane and shot dead his wife Elsa and daughter Cynthia ("Cindy"). On talking to the Sole Survivor, younger brother Johnny, Bolan discovers that his father was being squeezed by Mafia Loan Sharks and, on hearing that his daughter was prostituting herself to cover his debt, snapped under the pressure.

Figuring there's no point in fighting a war 8,000 miles away when there's a bigger enemy right here at home, Mack Bolan sets forth on a one-man crusade to destroy The Mafia, using all the military weapons and tactics at his disposal including heavy machine guns, rocket launchers, sniper rifles, night-vision scopes, radio-detonated explosives, electronic surveillance, silenced handguns and the garrotte. Bolan is also fond of using wiles to turn his enemies against each other.

In 1980 Don Pendleton sold the rights to Gold Eagle Books, who retooled the series by having Bolan fake his death in order to lead a covert US Government operation known as Stony Man, under the cover name of Colonel John Phoenix. Also part of Stony Man are two units whose story is told in their own spin-off series: Able Team (consisting of three Bolan comrades from his Mafia Wars — not to be confused with Able Squad) and Phoenix Force (a Five-Man Band assembled from the world's best anti-terrorist operatives, with no connection whatsoever to Jean Grey). Ostensibly Able Team was to operate inside the United States while Phoenix Force did so on an international level, but this idea was soon dropped.

After a KGB operation to destroy Stony Man caused the death of his girlfriend April Rose, Mack Bolan returned to his Vigilante Man origins, though he still does the occasional mission for Stony Man on an 'unofficial' basis.

Compare with The Punisher and Paul Kersey of the Death Wish series.

Not to be confused with the 2019 Visual Novel of the same name. The protagonist also has no relation to Marc Bolan of the British band T-Rex.

As of 2015, the series is out of print because of its publishing house, Gold Eagle, closing down.

Frequently encountered tropes in this series are: